Regardless of applying for any visa to Canada, the review of financial documents is usually the most important part of the visa officer. As for how much funds to provide is enough, this is a question often asked by our customers who usually consult us. This article will explain them one by one today.

The visa officer usually considers whether the funds can afford the applicant's tuition and living expenses in Canada when reviewing the financial documents of the study permit application. The possibility of visa refusal is naturally high. At present, the minimum living expenses set by the Canadian government for students studying abroad are 10,000 Canadian dollars per year, and if accompanying family members, an additional 3,4,000 Canadian dollars will be added. Of course, this is only the minimum financial requirement, the more the better the application.

If the applicant for studying abroad does not have sufficient funds and intends to apply for a Canadian college or university, if he can meet the requirements of the SDS program, he does not need to provide a large amount of funds, but only needs to provide a GIC deposit of 10,000 Canadian dollars.

The Canadian government's applications for skilled immigrants (including federal and provincial nominations) are calculated according to the number of family members, usually including the applicant himself, his spouse, his own children, and his spouse's children. It is also important to note that even if the spouse or both dependent children are not following immigration or are already permanent residents/citizens of Canada, they must be counted.

To apply for a Super visa for a parent, in addition to the child being a permanent resident or citizen of Canada and providing the parents with medical insurance with an insured amount of at least CAD 100,000, the child also needs to meet the minimum income. The minimum income requirement is still calculated based on the number of family members. Family size includes the number of members of the child's own family and invited parents

For example, if the child already have a family of three in Canada (spouse and one child), and now they want to apply for super visas for two parents, it is five people. Then their family income must meet at least the minimum income standard (LICO) published by the IRCC of 54,630 Canadian dollars. (LICO full form is below) 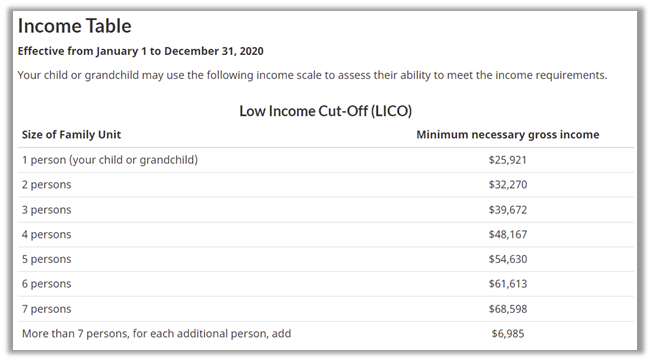 The income requirements of parent sponsorship immigration application are usually announced before the program is opened every year, but as of now, the government has not had any news about reopening the program in 2022, so the latest income standards have not yet been clarified. However, based on the current epidemic situation and the past policies of the government, we expect a great probability that the income of the sponsor in 2021 will still be the same as in 2020, and the sponsor only needs to meet the minimum income. Of course, it is more secure if the sponsor has a high income and already meets the minimum income +30%.

The algorithm for the number of a parent sponsorship immigration application also includes the number of members of the child's own family and the parents sponsored.

The following are the 2021 parent-sponsored immigration income requirements for reference: