The Federal Express Entry fast track conducted the second invitation this month specifically for the Canadian experience category CEC on June 25. The minimum score fell to a new low of this year, which was 431 points. A total of 3508 people were invited. The official website screenshot is as follows:

In addition, the Federal Express Entry Fast Track conducted the second invitation for the provincial nomination of PNP on June 24, with a minimum score of 696 points, and a total of 392 people were invited. The official website screenshot is as follows: 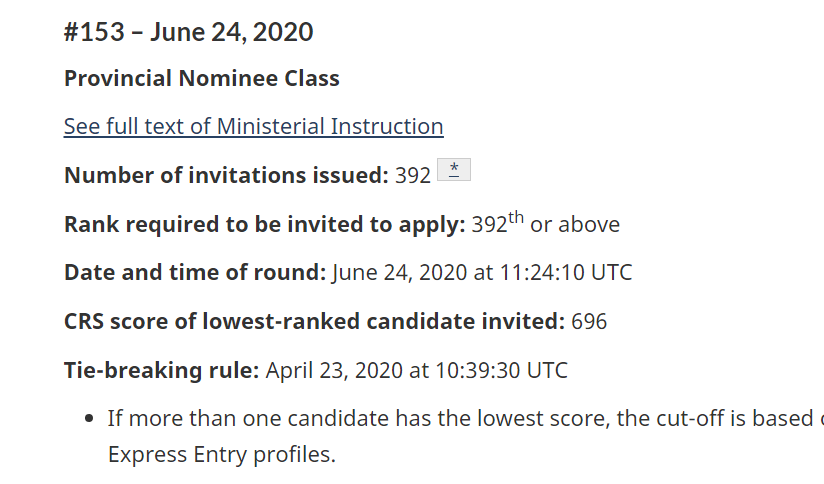 Let’s take a look at the invitation to the Federal Express Entry in May. On May 28th, EE conducted the second invitation specifically for the Canadian experience category CEC in May. The minimum score fell by 440 points, and a total of 3515 people were invited.

On May 14th, the Express Entry fast track conducted the first invitation specifically for the Canadian experience category CEC in May, with a minimum score of 447 points and a total of 3371 people were invited.

The following is the EE invitation from January to June 2020, the total number of invitations is close to 50,000: 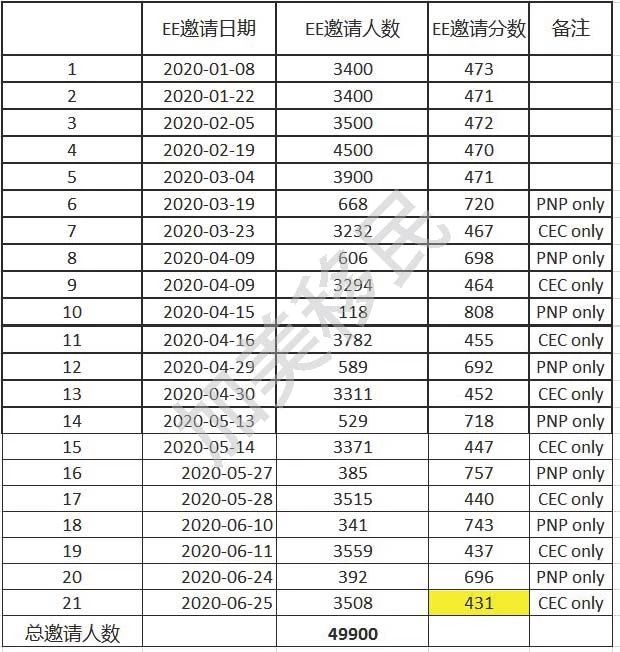 Since the outbreak of the COVID-19 epidemic  IN March, there have been invitations for PNP or CEC applicants. In addition, as can be seen from the chart above, EE-PNP and EE-CEC rarely issued a total of three invitations in April.

The following is the EE-CEC invitation score chart so far: 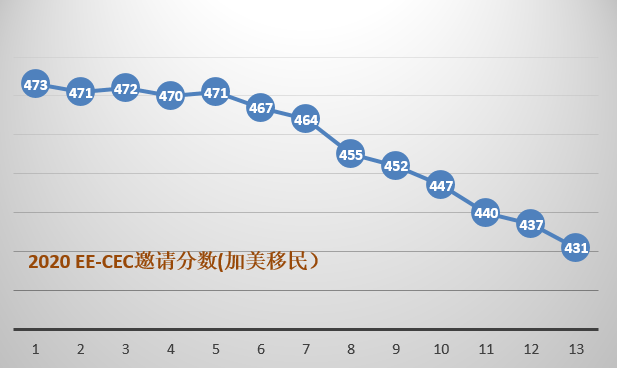 Since March 23, the EE-CEC invitation score has been declining. In May, EE-CEC fell below 450 points, and today's invitation fell further to 431.

Next, the Canadian and American immigrants will analyze in depth for you, why the invitation score of EE has been declining recently:

1. One of the main reasons for the decrease in EE scores is that EE has started to invite by categories. Of course, the most fundamental reason is because of the epidemic. The previous EE invitations are basically General, regardless of the specific category. Whether it is FSW overseas skilled immigration or Canadian experience immigration CEC, provincial nominated immigration PNP, all are invited together.

However, you can see from the invitation diagram above that starting from March 19, 2020, EE has started to invite by category, only PNP applicants with provincial nomination certificates and CEC applicants with Canadian experience. Because of the epidemic, Canada has restricted all non-essential travel, so it does not invite overseas applicants at the same time.

2. Even for PNP and CEC applicants, there are fewer and fewer applicants with high scores in the pool. Since all language test centers were closed during the epidemic, everyone knows that language scores are a necessary condition for EE to enter the pool. Usually NOC 0, A jobs require an IELTS score of 6 points, while B-type jobs also require an IELTS score of about 5 points.

This has led to some applicants who may have met the requirements of the immigration office with their work experience, but because of the lack of IELTS results, they have been unable to enter the pool to participate in the invitation.

Or some applicants have had an IELTS score before, but the score is not satisfactory. Before the epidemic, they can still improve their EE score by brushing IELTS, but now this method will not work.

3. Another reason is that during the epidemic, many people (such as restaurants, schools, car dealers, etc.) lost their jobs, so there is no way to continue accumulating work experience in Canada.

Because there are fewer and fewer high-quality candidates in the pool, but the Immigration Bureau still follows the invitation frequency once every two weeks, and the number of people invited has not dropped significantly, so the score will continue to decrease.

This is good news for international students who have already had qualified English scores. But keep in mind that your English score must be valid within 2 years.

Looking at the current situation in Canada, the border has not been unsealed, the language test center has not opened, and the score is expected to decline further. Applicants who wish to qualify will quickly seize this rare opportunity.

We see that in the EE system announced by the USCIS, as of June 22, there were 21,244 people in the EE system between 451 and 500. Although the Immigration Bureau did not distinguish the application categories, but because the EE-CEC applicants have dropped to 431 points, it is expected that most of the interval is overseas applicants. It is expected that the competition for overseas applicants after the epidemic will be more intense than before.

The following is a screenshot of the official website: 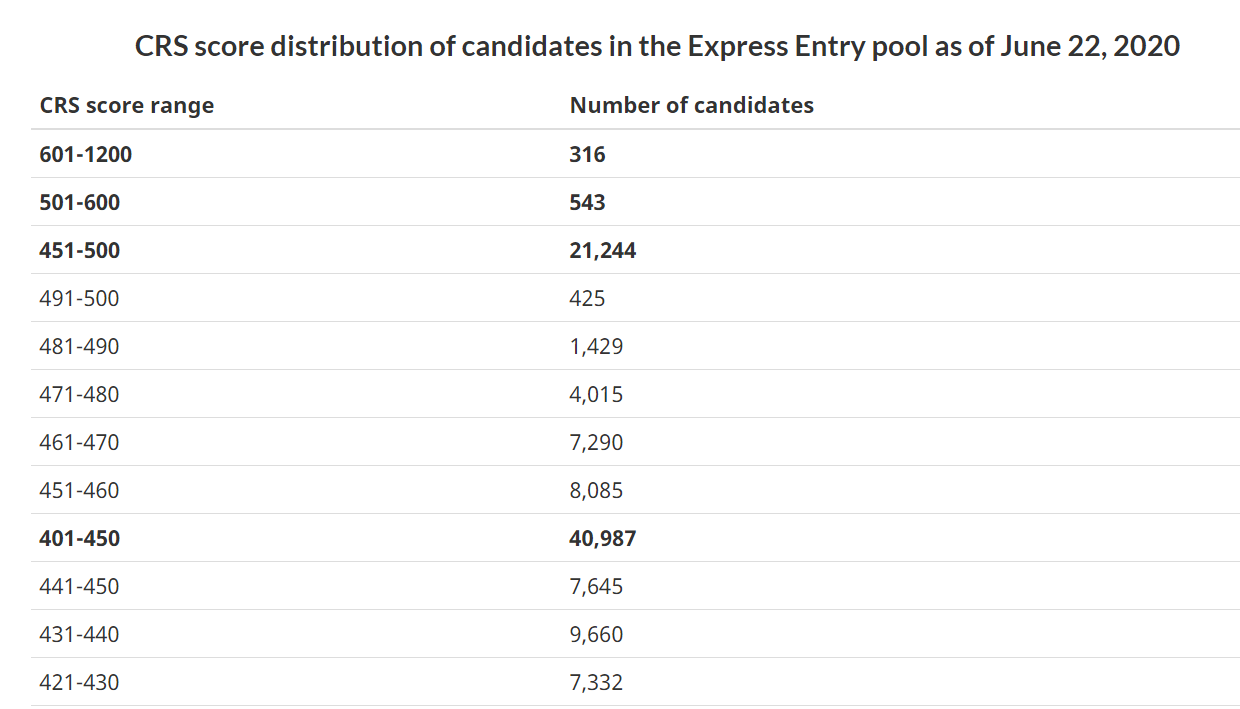 We advise qualified applicants to prepare as soon as possible. For more information, please consult Canada and the United States immigration consultation. We provide free consultation to tailor the most suitable immigration and study abroad program for you!